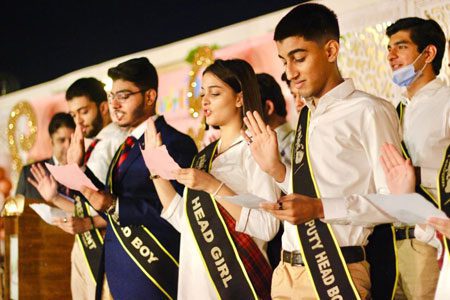 Millennium Governance System is the heart of student life. It`s the most representative and powerful student organization because it stands for all students and their rights.
With the commencement of each academic year, the selection of deserved candidates for the student council positions starts. The process starts off with the nominations of the learners which are selected by the TME Faculty after formal interview depending on the criteria as specified in the Millennium Governance Booklet. Followed by the nominations, are the election campaigns where all nominated learners deliver speeches to encourage other learners to vote in their favor.

For last two years, the student council election campaigns and nominations were being held online. However, as this year, learners were back to school, proper student council campaigns, elections and oath-taking ceremonies were held across all The Millennium Education Schools, Future World School and Colleges and Millennium Colleges. Some of the campuses organized mega-events where they invited famous personalities like Dr. Faisal Mushtaq (CEO and Founder TME), Ms. Sabina Zakir, Director Communications, Community and Outreach, leaders to share their stories, congratulate the elected learners and motivate other learners to come forward and avail every platform and opportunity their school provides them with.

While at other campuses, parents were invited as the chief guest to celebrate the achievement of their children and award them sashes. The ambiance of the ceremony filled with love, joy, and happiness. The eyes of the parents sparked with happiness as they witnessed the achievement of their children. Happy Parents, Happy learners are the building blocks of a happy school.

On all oath taking ceremonies, the Head/Principal/Headmistress of the school highlighted the importance of the student council and how this day forward it is up to the elected learners to live up to the expectations kept from them and to honour themselves and their peers by making them proud and owning their position and all the responsibility that comes with it.

At the end of the ceremonies, the Student Council formally took the oath where they promise to uphold the values and fulfill their responsibilities, pledging to take it to even greater heights!